I hope you all had a Merry Christmas yesterday! For some families, there may be another Christmas celebration today or later in the week with more friends or relatives. I wish you continued blessings, whatever your holidays may look like.

I think I handled it pretty well, because I was careful to plan in advance some ways to make the actual day of Christmas extremely meaningful, and not depressing. For me, this included starting the morning off at a monastery for some reflection and solitude, and then ending the day with close friends who were both sensitive and cheerful.

I made some notes in my journal that year about what I would repeat and what I would do differently. I knew I would forget two years later, the next time I had a Christmas without my son.

This year, I realized it would be helpful to also do this for the years that he is with me on Christmas day. Just because I get to spend Christmas with him, doesn’t mean I am not still co-parenting with his father.

Whether or not you’re a single parent, here’s a quick and easy activity you can do to make next year’s holiday season even better than this year:

Take some time this week to write down things that worked well. If you’re a single parent, make note of what seemed to help your children have a smooth transition between parents over the holidays.

Next, write about the things that were a bit more clunky or just downright stressful and frustrating. If needed, give yourself some time to calm down and think through what might work better next year.

You may have already realized these things and you just need to write them down. Or you may need to spend some time with a cup of tea and a good friend to process what happened, and what could realistically improve next year for your particular situation. 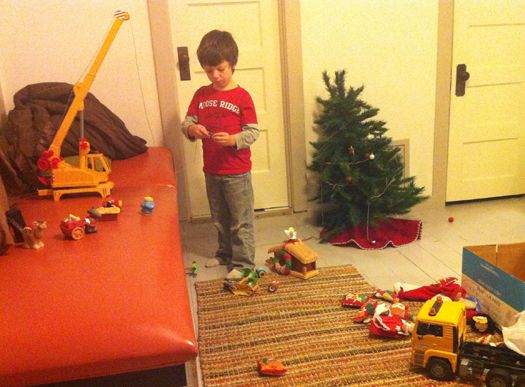 Look over everything you’ve written and rambled, then make a short, simple list of the positive things that worked and a few ideas for solutions for next year. Put this list in an envelope in the box with your Christmas decorations.

This isn’t about trying to get it perfect; it’s about helping yourself remember all these things when next Christmas season rolls around, so that every year you can continue to increase the peace and joy as much as you can. Here’s to a great Christmas in 2013!

What did you do this year that helped your family have a more peaceful Christmas?