In the summer of 2013, I slopped into my last good drink, awoke to the ceiling spin of my last unconscionable hangover. There is no sense of pride in these sentences, only embarrassment, but facts are facts, and this is the fact of the matter.

My reentry into sobriety was a tender one that September. Sure, there was the dull thud of a mallet against skull. Yes, the floor pitched and yawed like a ship deck. Still, there was no violence in my coming clean. It was graceful, bearable, almost sweet, if such a thing can be said about becoming undrunk.

I recorded the earliest days of my journey into sobriety. Here is the account of that epiphanal moment:

This is the anatomy of an undoing.

Drink yourself to sleep for eight days straight. Drink at the first inkling of doubt, of pain, of upendedness. Drink until you feel like a slave to the couch. Drive to Austin and shack up in the company of good Christian people; occupy yourself with alcoholic mathematics; count drinks for two days while others around you are sharing life; try your best to get ahead of conversations, to catch yourself before you utter the drunk stupid thing that seems so brilliant in the moment; sit against the rails on the front porch with a bottle of tequila in the small of your back; wake late on the third day and rely on Tsh to bring you to the conference venue; hope she doesn’t smell tequila on your breath when you thank her for the breakfast tacos she’s brought, because she is among the circle of people who might catch the stiff scent of hypocrisy like a coyote does roadkill.

I breathe out of the side of my mouth, and we enter the Methodist church together. We are latecomers, and the morning speakers have already taken center stage. Before I make it through the lobby, though, I meet a prophetess.

Heather King is a new transplant to Austin, a born-and-bred Minnesotan who carpetbagged to the Lone Star State with her husband, children, and accent in tow. I’ve known Heather for years, she being a writer who swims in the same streams as I. Years ago, Heather wrote about her own bout with alcoholism, wrote about her process of finding sobriety. She served as inspiration for more than one sobriety story, and yet I never expected she would serve as any sort of catalyst.

She approaches from the far side of the foyer on that throbbing Saturday morning, her eyes the shape of my grandmother’s, her smile echoing that same grace. She turns her head sideways, asks, “How’d you sleep?”

If a man’s lucky, he gets a shining moment of clarity, a veil-splitting moment. Before I can lasso my words and tug them back, they escape into the Austin Methodist foyer, bronco-wild.

“How did you know you had a drinking problem?” I ask without context.

I’ve described it since as a moment of one thousand epiphanies. The corners of the room pull taut, the ceiling lifts, the floor drops, and Heather speaks the truest question I’ve heard in a long time.

There’s no voice from heaven, no fanfare or bright light, but the familiar Spirit-whisper is unmistakable. “You can take care of this now, or not,” I hear, “but if you don’t, it’s downhill from here.”

There I am standing in the vertigo induced by human confession, and I search for the words to put it all in perspective, to justify it all. But Heather’s eyes are too much like my grandmother’s, and she won’t let me run.

“You know that doesn’t matter, right?”

“No, I don’t. I was actually hoping you’d say that means I can’t have a problem.”

“How many drinks do you have per night?”

“What do you mean? I suppose it depends on the pour.”

“Yeah, I suppose. Do you lie to Amber about it?”

“Do I lie? I don’t necessarily tell the truth, and she doesn’t necessarily ask,” I say. “I snag a drink at around four most days. I grab a drink as soon as I get home so she’ll think the smell of liquor is fresh, so she won’t suspect me of drinking at the office. I top off drinks when she goes to the bathroom. I use too much liquor in my mixed drinks. But lie?”

Her slight frame straightens. “I’m sorry. I can’t tell you whether you have a problem, but you know, right? In your heart of hearts, you know?”

She is pushing into truth with only questions.

This is the beginning of an awakening, the genesis of one thousand epiphanies. I couldn’t stop them if I tried. “Now what?” I ask Heather.

“It sounds cliché, but it’s the best I have,” she says, and then adds, “You have to take it one day at a time. This is day one.” 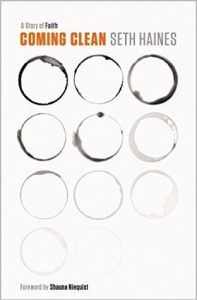 Some of us wait for the rock bottom before giving up the ghost of addiction–the bottle, the eating disorder, the shopping addiction. But there is a gentler way, the way of breakfast tacos and kind eyes. There are paths through sweet epiphanies and into sobriety, if only we look for them.

Note from Tsh: Guys, I haven’t been this excited about a book in a long time. It’s not because my name is mentioned in it (but hey, that’s kinda cool), but because Seth Haines is one of my favorite writers. He’s a fantastic storyteller. Go get his book—you won’t be disappointed.

(A few affiliate links are used here, which means at no extra cost to you, making a purchase by clicking these links helps support this site. Thanks!)
Uncategorized