There are already two children, probably around 2 (a handful of months older than my son), playing with the toy kitchen in the library.

Jack is shy at first, pushing his body back against me as he watches, eye trained on their busy fingers banging pots and pans, pulling open the oven door and occasionally pulling on each other’s shirts.

The mom looks up, friendly, as I fumble through signing that it is okay for him to go explore, that these are nice new friends that he can meet. “Do you sign with him?” she asks.

I nod – and hesitate, before plunging in without drawing breath that since we don’t know yet about how he will prefer to communicate, whether his hearing loss (the one missing ear makes it conductive rather than what they call ‘simple’ deafness) will mean he prefers signing or speaking.

She smiles, genuinely interested. It turns out she was a speech language pathology major at Baylor. When she asks what I do, I tell her I study the philosophy of disability.

I feel the rest of the words in my throat, afraid they’re too much too soon:

I study arguments about why disabilities are not intrinsically bad – why they’re things that make a life different. I study ways to think about disabilities as mere-differences (this phrase I owe to the philosopher Elizabeth Barnes), I study ways to understand the human heart and mind and body as something capable of being created mysteriously and I argue that we shouldn’t think that someone’s being disabled means they should be pitied.

I don’t say them.

Eventually Jack gets brave enough to pull himself into standing and walk over to try and grab a pot lid. The boy and girl lose interest soon afterward and start running around.

The children’s librarian looks over disapprovingly. The mom and I share a bit of a laugh and slowly we each turn to our parenting tasks and the morning slips by, minute by minute.

Two months later, in Target, Jack and I are walking towards the diaper section when a different mom with two girls passes us.

Jack is in the midst of trying to hold the small red basket by himself. It’s too big for him, so he laughingly stumbles and then whimpers for me to pick him up.

I sling the basket over my shoulder and hoist him up so that he can survey the bright lights and the big white and red Target dog at the entrance.

The mom and I exchange glances, and she doesn’t smile back.

Just as they are level with us, I hear one of her daughters ask a question I know too well: “What’s wrong with that baby?”

She doesn’t really try to shush them, from the little I can tell as they walk by. She keeps pushing the large cart with the girls riding in two big bucket seats in the front, and I hear a few words – “medical,” “why?” and “stop” but I don’t know what they’ve said.

I don’t know where their conversation has drifted or if as is the way of many conversations the girls have noticed something else extraordinary and are investigating it.

When I look back at Jack, his eye is locked onto mine.

It won’t be long, I realize again, until he will have his own questions for me.

My son is built uniquely. This is my final answer to those indirect questions, to the thousand “whys” I see flicker across other faces.

My son was created this way.

But I do not think it is that simple.

A life is contextual.

When I see that someone is a parent, do I learn that their life is intrinsically worse or better?

When we learn that someone is from South Africa or Texas or France, do we learn an additional fact about the quality of life that they have?

I am not suggesting that we never learn anything about the quality of a person’s life from learning facts about them; but I do want us to think about how the context of the facts, the way facts are bound up with other facts and with the lived experience of that life, should complicate the picture.

Jack can tell you what it is like to live with his disabilities. The disabilities themselves don’t speak.

Even as I write this, I feel the pressure to explain his condition to you, to make it sound understandable, to make it something you can share in either by shrouding it in medical terminology you could go look up or by surrounding it with emotions or life lessons for the curious.

I feel a requirement to satisfy curiosity in readers or in children in libraries and grocery stores and church pews.

Curiositas, the Latin root of our curiosity, was understood to be a vice by medieval philosophers and theologians.

Aquinas writes in the Summa Theologiae that there can be sin in the desire to learn the truth (which sounds so odd, doesn’t it?) because it can be an inordinate—a disordered—love.

Among the ways this happens, he writes, “When a man desires to know the truth about creatures, without referring his knowledge to its due end, namely, the knowledge of God.”

We so often encourage curiosity in each other, especially in children. “Be curious!” we say, “ask questions! Seek out answers!”

We have forgotten what medieval thinkers kept at the forefront of their minds: every longing, every desire, can go wrong if it becomes too expansive, if it starts to cloud or obscure the wiser thing to do or say.

Curiosity can find me and my son in the aisle in Target and leave us staring at each other in its wake.

That book is in the Target where the daughters and their mom walked past us.

When we walked through the book aisle he pulled down coloring books and looked up at the bright fluorescent lights and he laughs his wild giggle.

We leave Target and come into the sun and wind.

Next time I want to stop her and tell her that my son can hear what her daughters say.

That my son’s face requires no explanation, that his name is Jack and he loves to carry the red basket even though it’s too heavy for him.

Osheta
5 min read
Since I was a child, Mother’s Day and handmade 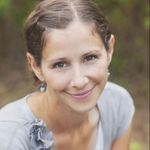