When asked if she would ever marry, Audrey Hepburn responded, “If I get married, I want to be very married.”

Strictly speaking, this isn’t possible. There’s no difference between dead and very dead, and there is no spectrum spanning from “sort of married” to “moderately married” to “very married.” But sometimes that which is not technically possible is nevertheless profoundly true.

I love Hepburn’s words because they are precisely how I see my own marriage. It isn’t a perfect marriage, but we are nevertheless very married.

I wouldn’t want it any other way. 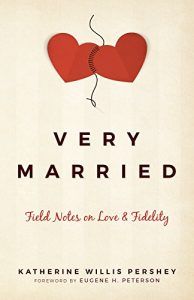 I’m nearly finished writing Very Married: Field Notes on Love & Fidelity. It’s my second book, and it’s scheduled to come out in September from the wonderful Mennonite publisher, Herald Press. Although I was reluctant at first to write about my marriage – the book is a blend of personal narrative, theological reflection, and cultural commentary – I’m thrilled with the way it’s turning out. The process of researching and writing it has strengthened my own marriage, and I’m hopeful that the book might do the same for readers as well. (It’s available for pre-order here.)

I can tell you right now that it’s not going to be one of those books offering ten secrets or seven keys or one mind-blowing mystery to save your marriage. To be sure, some of those books offer sound advice and valuable wisdom. It’s just that I have begun to suspect that the most important words about marriage aren’t found in a self-help book, but a prayer book.

I’m talking about the words that are spoken, before God and grandmother, to establish the covenant of marriage. The vows to have and to hold, from this day forward, for better, for worse, for richer, for poorer, in sickness and in health – until death.

The point of a wedding isn’t for two people to publicly profess their love for one another. That much is obvious. The point is to promise that they will keep loving one another, come hell or high water.

• gave us the courage to seek out marriage counseling when we nearly destroyed our relationship with immaturity and indignation.

• gave me the wherewithal to walk away from temptation when I realized that I had developed a dangerous crush on a friend.

• give us a safe harbor in which to learn the ways of kindness, forgiveness, trust, and compromise – day in and day out.

It’s that simple, but it’s not easy. Marriage is hard.

Even the happiest marriages require a great deal of work, largely because marriage demands that we forsake our deeply-ingrained human tendency toward selfishness. The only way we know how to stay “very married” is to cling to one another, and to the promises we made in that church on a hot summer day in 2002. We find such joy in mutuality, such grace in faithfulness, such freedom in fidelity.

For us? The vows are everything.